You are here: Home / Archives for Metal Fatigue 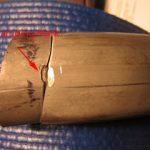 An interesting failure of steel tubing was observed when 1 3/4″ diameter A513 Type 5 steel tubing was being bent in a tubing bender. In this case the tube was clamped into the bender in the wrong location. At this time the clamp bolt had made an indentation (nick) in the pipe surface. The pipe […]

Failure analysis was performed on a failed pin from a large tractor. The upper right gives an overview of the pin. Upper left is a close up of the fracture surface. The fatigue crack originated at the top of the photo and progressed downward until the final overload failure.