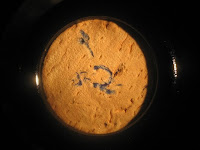 Glass Failure Analysis Expert Witness Performs Wine Bottle Failure Analysis. In this product liability case the user was injured as the cork was being extracted. The glass failure expert witness performed a glass failure analysis and determined that the bottle failure initiated at the very top of the bottle. Thus, the cork screw could not have caused the damage that initiated the failure. Unopened bottles from the same case were examined, and it was discovered that the rod that pushed the cork in was very close to the glass in three of the four bottles that were examined. This indicates that the failed bottle was damaged during the corking operation. In addition, the forces used to extract the cork drove the pre-existing crack to failure. The photograph on the upper left is of the failed bottle top. In this photo the origin and crack travel direction are indicated. Upper right is a top down photo of a cork from one of the unopened bottles. The impression made in the cork is from the rod that pushed the compressed cork into the bottle. One can see from the impression that the rod was not centered. This indicates that the subject bottle failed due to corking damage. This is a manufacturing defect.