A root cause failure analysis was performed by Read Consulting on a failed wine bottle. The failure initiated in the bottle neck under the label.

Examine the visible fracture surfaces and determine the approximate location of the fracture initiation site.

An overview of the bottle as it was received for the failure analysis is shown in Figure #1. The travel directions of the exposed cracks indicated that the failure origin was in the bottle neck under the foil. 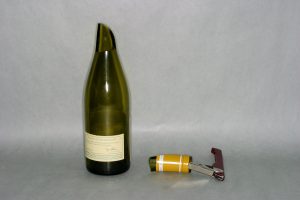 Figure #1: Overview of the as received wine bottle. 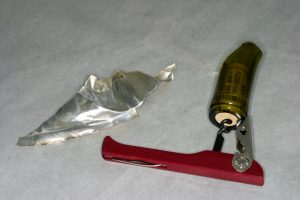 Figure #2: Photograph of the neck of the failed wine bottle. This photo was taken after the foil was removed. 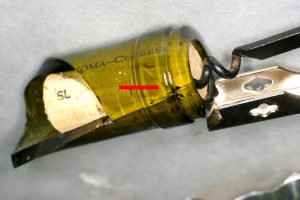 Figure #3: Detailed photograph of the neck in the region of the failure initiation site (star shaped crack cluster right of the red bar). 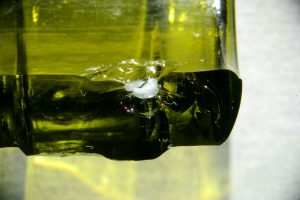 Figure #4: Photograph of one-half of the bottle neck after the neck had been opened up to allow proper failure analysis. The failure origin is the milky white region in the photograph.

Figure #5: Close-up of the failure origin. The cracking emanates from the milky white material in the center of the photograph. It appears as if the root cause of this failure is a piece of un-melted cullet (recycled glass) (Mag. 20X).

Root Cause of Failure

This failure analysis revealed that a piece of unmelted glass had created cracks in the bottle as it cooled down from the forming operation. The final failure occurred when the corkscrew was leveraged to remove the cork.