You are here: Home / Failure Analysis / Glass Failure Due to Edge Grind Damage 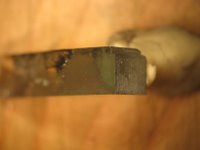 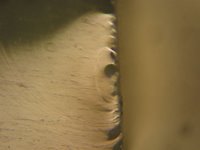 Read Consulting glass failure experts analyzed several cracked laminated windows. They were made from two pieces of 1/4 inch thick glass laminated with 0.02″ thick PVB. Oneof the glass panes is tinted such that it absorbs 65% of the incoming “heat” from light. It is the tinted piece of the laminate that broke. The failure analysis determined that the crack initiated as a result of tensile stresses and the presence of edge grind damage. It is theorized that the stress was generated due to the fact that the window edges were covered and therefore cooler than the center of the pane. The photo on the left is of the fracture surface showing the origin. It is in the center of the edge face. The photo on the right is of the edge face. It is apparent that the damage initiated from the edge grind