Glass Failure Analysis Expert Witness performs a failure analysis of a several tempered glass doors that had “spontaneously failed at a construction site. The objective of this glass failure analysis is to determine the cause of failure and make recommendations to the contractor.

Randomly select two of the failed doors and perform a detailed failure analysis. If these two failures show common cause, then they are representative of the entire lot of tempered doors.

Sample Preservation: The approximate location of the failure origin was located. Next, a 12inch square with the origin in the center was taped with a pressure sensitive tape. Once the 12 inch square of glass was secured, it was removed from the window. This was then transported to the laboratory for the failure analysis.

Removing the Origin: At the laboratory, the exact location of the origin was determined, the tape was removed from this location, and the critical four pieces were removed.

Optical Microscopic Examination: Optical microscopy was used to examine the fracture surfaces to find the origin.

Scanning Electron Microscope (SEM) with Energy Dispersion Spectroscopy (EDS): A SEM with EDS was used to document the origin and to determine the elemental chemistry of the origin.

Figure #1: Photograph of the 12 inch square preserved from one of the two windows examined. The potential failure origin is approximately centered on the square. 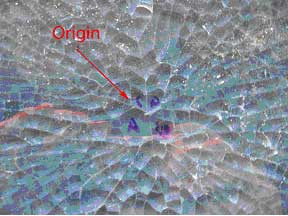 Figure #2: Close up photograph of the origin. It is at the center of the spreading radial cracks, and it has the appearance of the outline of a butterfly. The four pieces removed for further examination are labeled A, B, C & D.

Figure #3: Optical photomicrograph taken of the fracture surface, and it includes the origin. At this magnification the origin is a small spec. It is located by tracing the Wallner lines backwards (Mag 8X) 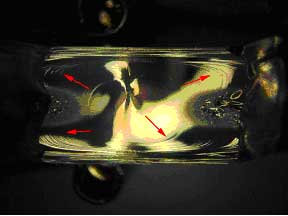 Figure #4: Another optical photomicrograph taken of the fracture surface at the origin. At this magnification the origin is a still a small spec. This is photograph was taken after gold had been sputtered on the surface. This made the Wallner lines more visible. One can see that the Wallner lines are emanating from the center of this piece of the fracture surface (Mag 20X) 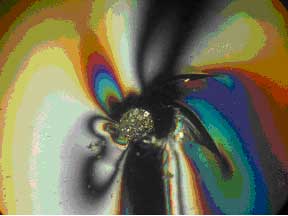 Figure #5: Higher power optical photomicrograph of the origin shown above using Nomarski Interference Contrast (NIC). At the origin is a 180 micron spherical particle. This is the cause of the failure (Mag 200X). 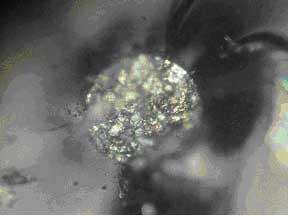 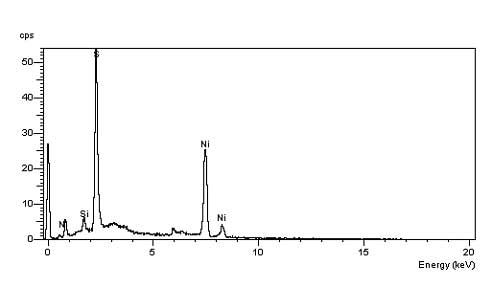 Figure #7: Elemental composition of the spherical particle determined with EDS. The elements present are Nickel (Ni) and Sulfur (S). The particle is a nickel sulfide (NiS) particle.

Both tempered doors failures were caused by spherical NiS contaminant particles. One particle has a diameter of 180 microns. The other particle has a 100 micron diameter. In addition, both particles were centered 2.3 mm from the edge of the glass. This failure mechanism is well known and has been previously documented. The NiS particle forms during glass manufacturing. It is created by contamination in the fuel (S) and nickel from tools used to handle the hot glass. Initially it is one crystal structure; however, over time it will change to a less dense crystal structure that creates local stresses and cracking. The rate of occurrence varies with respect to the manufacturer. NiS contaminants are said to be a problem with fully tempered glass. It is believed that heat strengthened glass does not fail as a result of NiS particles. It is believed that NiS particles are present in heat strengthened glass, but they cannot cause failure.

Figure #1: Macro-photographs of the as received glass near the origin. In both cases the origin lies between the two halves of the “butterfly”.

Figure #2: Photo-micrographs of the fracture surfaces near the two origins. These micrographs show Wallner lines emanating from one spot. This identifies this spot as the failure origin (Mag 8X)

Figure #3: Photo-micrographs taken at the fracture origins. These micrographs show that both failures originate at a spherical contaminant (Approximate Mag 250X).

Figure #4: Scanning Electron Microscope Photo-micrographs of each particle at the fracture origin.

Figure #3: Photo-micrographs taken at the fracture origins. These micrographs show that both failures originate at a spherical contaminant (Approximate Mag 250X).

Figure #5: Energy Dispersive Spectroscopy (EDS) data of the two spherical particles at the origins of the two failures. Both particles are nickel sulfide (NiS). That is, these particles consist of the elements of nickel and sulfur.