Failure analysis expert witness performs a root cause failure analysis on a wine bottle that was involved in a personal injury lawsuit. The glass expert examines the fracture surfaces to trace back to the failure origin. Microscopic examination of the failure origins shows that the failure was not the result of a manufacturing defect. The bottle failure was caused by improper use of a corkscrew. In this failure there are two initiation sites. Each initiation event was caused by interference of the corkscrew with the inner wall of the bottle neck.

This bottle failed as a result of damage to the inner wall of the neck from improper use of the cork screw. 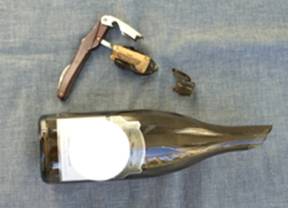 Figure #1: Overview of the failed bottle. There were three separate pieces. Two pieces were from the neck and the other the remainder of the bottle. The neck had broken open, and one piece still contained the cork with the cork screw still in it. 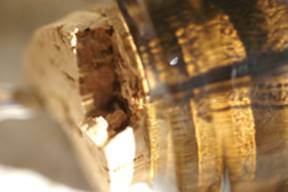 Figure #2: Photograph of the other side of re-assembled neck. This shows the fracture on the opposite side of the neck. In this case the two halves of the fracture are pushed together. 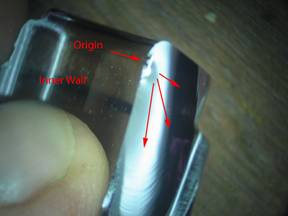 Figure #3: Photograph of one half of the fracture shown in Figure #2.  This crack was initiated by damage from the corkscrew tip. It appears that the corkscrew was inserted twice. The first time the point hit the inner wall of the neck near the top and initiated a crack that was later opened when an attempt was made to withdraw the cork. After initiating this “first” crack, the corkscrew was withdrawn and re-inserted. The arrows show the travel direction of the crack.

Figure #4: Close up of the top of the bottle near the second fracture. This shows the damage to the cork when the corkscrew was first inserted. 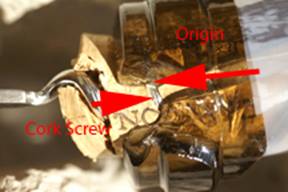 Figure #5: Photograph of the re-assembled neck. This shows the second fracture on one side of the neck. This failure was caused by the side of the corkscrew being driven into the inner wall of the bottle. The two halves of the fracture are parted because the cork has expanded since it is no longer squeezed in the neck. 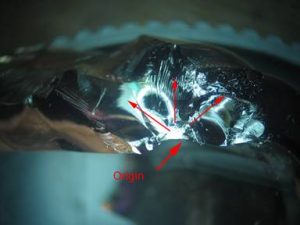