Glass Failure Expert Determines the Root Cause of a Beer Bottle Failure Summary: Glass failure expert describes a root cause failure analysis performed on a one-quart beer bottle involved in an injury accident.

Introduction: When a clerk at a convenience store was placing a glass quart bottle of beer into the cooler it “exploded” and a piece of glass went into his eye. The challenge was to determine the cause of the failure.

Procedure: The bottle was assembled and the approximate location of the crack initiation site was located. This location was then examined with a low power microscope, and the crack origin was documented.

Results: This was a delayed failure that was initiated at a time prior to the final failure. At some point prior to the accident the barrel of the bottle had been bruised. This is demonstrated by the “mirror” failure at the origin (Figure #1). Parts of the origin were missing; however, there was enough of it to determine the cause. In addition to the initial mirror, there are three crack arrest lines that indicate that this particular failure had started and stopped several times before the final break (Figure #2).

Conclusion: This failure was initiated at some point before the final failure that caused the eye injury. 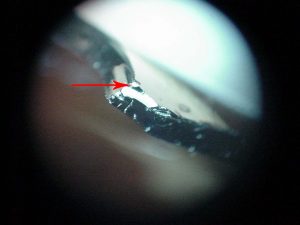 Arrow Indicates Mirror Initiation Site: This is on the outer surface of the bottle.

Figure #1: Fracture Initiation Site: The failure initiated at a bruise on the outer barrel of the one-quart bottle. The initial impact created the mirror fracture at the top of the picture (Magnification 15X). 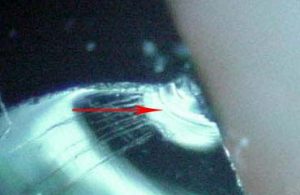 Figure #2: higher Magnification of the Crack Initiation Site. Here there are several crack arrest lines that indicate that this failure was initiated at some time prior to the final failure and injury (Magnification 40X).