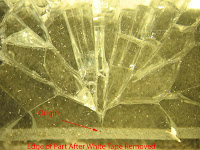 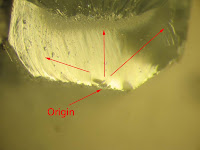 California failure analysis expert uses glass fractography to perform a glass failure analysis on a tempered glass window failure. The glass fracture analysis showed that the window failure was a result of heating the glass in the center. Due to the heat, the center of the window expanded. This created additional tensile stress on the window edges. Although the window edge was ground and chamfered, there was enough residual damage at the edge that the thermal stresses were able to cause window failure. Upper left shows the failure initiation site on the edge of the window. Upper right is a 40X photo micrograph of the origin on one of the fracture surfaces. The glass fracture analysis showed that the glass failure initiated on the window’s edge face and propogated inward until the tensile center of the tempered glass window was reached. At this point the residual tempering stresses caused the entire window to self destruct into small “cubic” pieces. This may be a manufacturing defect because of the severity of the edge damage.