Read Consulting Failure Analysis Laboratory examined a failed champagne bottle that had exploded in a user’s hand.  The pressure in a champagne bottle is approximately 90 psi. The user’s hand was severely cut due to the release of pressure when the bottle failed. All cracking emanated from near the top of the bottle. In addition, the subject cork was also damaged where the bottle top would be. Microscopic examination determined that  the inner wall had “chatter” damage from a sharp point being dragged across it. This damage ran into the fracture origin. These discoveries indicate that while the cork was being pried from the bottle, the tip of the lever (probably a cork screw) damaged the inside wall of the bottle near the top and started a crack that caused the bottle to fail. See the photos below. This is not a manufacturing defect. 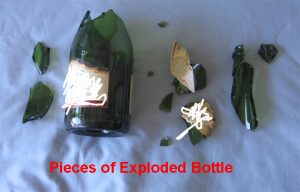 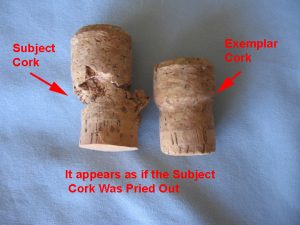