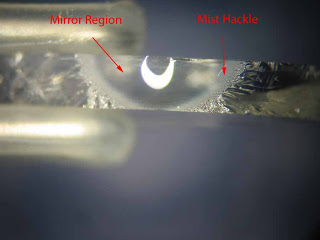 A California failure analysis expert has been testing the strength of beer bottles by causing them to fail from pressure overload. In all cases the origin always had a mirror region at the origin. The presence of the mirror region indicates that the crack initially grows slowly. Theoretically, the mist hackle  indicates that the crack velocity has reached its terminal velocity. As a part of bottle failure analysis, the absence of this mirror region would indicate that the bottle did not fail as a result of internal pressure. In addition, the presence of crushed glass and mechanical damage at the origin would indicate that the bottle had been hit by a hard object.