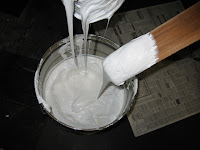 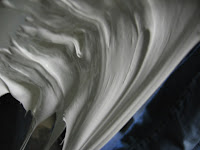 A California coating expert was confronted with a municipal water tank with a rubbery epoxy coating. The complaint was that the epoxy paint was not properly mixed, and it had not cured properly. During the coating failure analysis, the study showed that the epoxy paint was aliphatic amine cured. In addition, the tank was painted in the winter, and it cured at 50°F. Prior to filling with water, the tank interior was given a final inspection. During the inspection, the paint layer was found to be rubbery on the sunny side of the tank. Because epoxy is thought to be “cross linked” all were surprised that the paint was rubbery. and they were concerned that the paint adhesion had been compromised. Adhesion tests were positive. The fact is many epoxies ‘soften’ above their initial cure temperature. In this case, the epoxy paint had cured at or below 50°; thus, on a warm day (T> 70°F) the epoxy will initially be soft. However, over time, the paint will “re-cure” and harden at the higher temperature. The failure analysis demonstrated that there was no product defect.