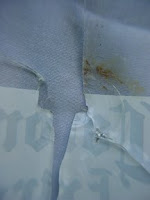 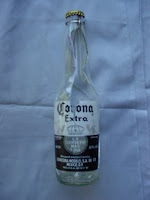 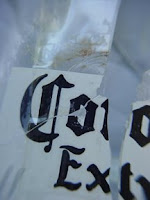 Glass failure expert analyzed a failed beer bottle to determine if there was a product defect. It was stated that the bottle exploded when it was put into a cooler filled with ice. The failure analysis revealed that the bottle had been hit with a sharp object. The photograph on the left is the bottle after re-assembly. The photograph in the center is a closeup of the failure origin from the outside of the bottle, The photo on the right is the failure origin from the inside of the bottle. The Hertzian cone from the impact is readily visible. It is obvious that this bottle broke after it was hit on the side. Thus there are no product liability issues or manufacturing defects associated with this failure.